“Two roads diverged in a wood and I – I took the one less traveled by, and that has made all the difference.”

Call it fate. Call it a friend looking out for another friend. Esther Chibi freely admits that she is lucky to be in her current position as a role model on a path that few young women in Zambia have travelled before.

As the inaugural recipient of The CanEducate Scholarship, Esther will receive tuition and hostel fees to support her pursuit of a two-year Masters Degree in Mining Engineering at the University of Zambia in Lusaka. The biennial scholarship is intended to support one young woman in her pursuit of a career in the mining engineering profession; and is the result of the passion and dedication of Katrina White, a former CanEducate Board member and Barrick / Acacia team member.

Katrina said she was interested in establishing a scholarship as an ongoing way to give back to the countries in Africa where she spent a good portion of her career working as a corporate lawyer.  As a woman in a male-dominated profession, Katrina said she was always keenly aware of the importance of supporting women who wanted to pursue a professional career in the mining industry in countries like Zambia. As much as Katrina is proud to see the establishment of the scholarship, she’d prefer the focus be on the achievements and stories of the scholarship recipients like Esther Chibi instead of her philanthropy.

“Growing up as a child I was a hard one – I was lazy,” said Esther. “But once I got to university something clicked and I began to focus. My parents both had careers in social services. I didn’t want to do that, so I did research on math and science careers.”

Esther said it was one of her friends that told her about the scholarship, which she’d seen advertised on the University’s website. There was only one problem. The deadline for applications was less than 24 hours away. She scrambled to get in touch with her professors to submit recommendations and transcripts and managed to submit her application with only one hour to spare.

“I just thought to myself: If this is meant to be for me – then it will happen,” said Esther. “I had faith that I would get it. It shows that all the hard work I’ve put in paid off in the future.”

When Esther reflects on why she has chosen to pursue a career in mining, she said it is a product of where she grew up as well as her desire to set an example for other young women to follow in her footsteps. 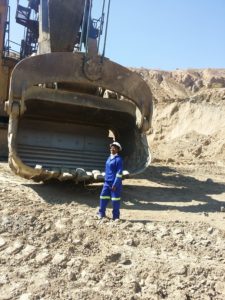 “In my country there are not a lot of female engineers. To be honest, I didn’t know what an engineer really was when I was at university,” said Esther. “But I grew up in a mining town, so I began to take a keen interest in mining. I knew that to be successful, I needed to work hard and be focused.”

When asked where she believes she will be in 10 years time, she shared an answer that is inspiring and reflective of the Traveller from Robert Frost’s famous poem.

“I see myself working in different regions of the world – Zambia, Congo, Canada, Australia, Chile – in order to experience how mining is conducted in different parts of the world and the technological advancements that have taken place in the industry,” said Esther. “Academic-wise, I would like to do my doctorate after gaining industry experience and then later lecture to pass on the knowledge I have gained. I hope that I can create opportunities for other young ladies and get out of that mindset that mining is just for men. You don’t have to be man to be a mining engineer – you don’t have to be sitting in the background.”