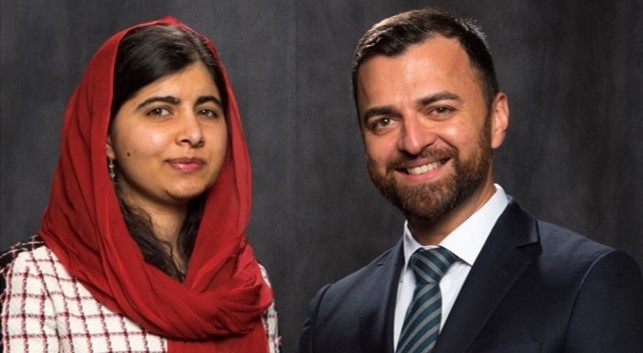 CanEducate President and Co-founder Rishi Ghuldu recently had time to sit down in Vancouver with Malala Yousafzai, the world-renowned Pakistani activist for female education and the youngest Nobel Prize laureate in history.

Malala is known for her ardent and high-profile support around human rights advocacy, especially the education of women and children. Over a decade ago, at the age of 12, she gained notoriety as an outspoken activist in her native Pakistan. After surviving several attempts on her life by the ruling Taliban regime, she moved to England and became a prominent activist and co-founded the Malala Fund, which is a non-profit organization and co-authored the international bestseller I Am Malala.

In 2014, at age 17, she was the co-recipient of the 2014 Nobel Peace Prize. In 2017, she was awarded honorary Canadian citizenship and became the youngest person to address the Canadian House of Commons.

In her short chat with Rishi, Malala shared her perspectives on the importance of supporting young women’s education, which is a core pillar of CanEducate’s mission.

“Education and going to school is a place where women should be protected and empowered,” she said. “We need a world where all girls have equal access to education.”

When their conversation turned to the benefits of promoting the early education of women, Malala said, “The goal is for girls to receive a full 12 years of education. There are so many benefits; this helps against early child marriage and helps girls secure better jobs.”

Rishi close their brief conversation asking Malala about her role as a visible leader and activist on the important of female education, Malala demurred and said:

“Yes, you have to believe in your own voice. But I am just one voice. The call is for the world to wake up.”