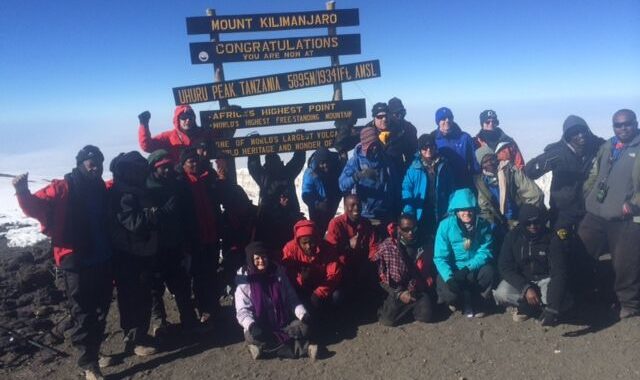 A group of 21 Acacia employees, friends and family, including CEO Brad Gordon, climbed Mount Kilimanjaro in late June 2015 as a part of a fundraising effort for CanEducate. The team took on this challenge of a lifetime to reach Uhuro Peak — the summit of Mount Kilimanjaro – and in the process raised $223,069 (CDN), which was then matched by an additional $200,000 from Acacia. This total of more than $493,000 doubled the fundraising effort that CanEducate set for 2015.

Mount Kilimanjaro is the highest mountain in Africa with its summit, Uhuru Peak, reaching 5,895 metres. The “Kili Climb” team consisted of Acacia employees from corporate head office in London as well as the company’s mine sites in Tanzania: Bulyanhulu, Buzwagi and North Mara. CEO Brad Gordon described the team as a “family”; and as you’ll read on page four of this update, the climbers tackled just about every variation of climate and terrain imaginable and endured not just the pure physical challenge of the climb, but also altitude sickness and mental fatigue.

“I was already very familiar with CanEducate. When making the decision on what charity to support on our climb, we asked our leadership and community relationship team, and universally they said CanEducate. It was the right choice.”

Acacia’s vision is to “Unearth Africa’s Potential” and to touch the communities in which we operate by offering support and opportunity. Acacia’s generous support has bolstered its partnership with CanEducate, which began at inception in 2010 where scholarships were provided for 158 students at Bulyanhulu. The program has since grown to cover 1,800 students across Bulyanhulu, Buzwagi and North Mara (by the end of 2014); and we’re proud to report that the program has also delivered some of the best performers in various schools in the National Form 4 examinations.

Thank you to Acacia, the “Kili Climb” team and all of the donors who supported them. The funds raised have exceeded CanEducate’s annual fundraising goal at the mid-point of 2015. As we progress into 2015, we will continue to keep all of our donors posted on the impact of your contributions in the communities in Tanzania.