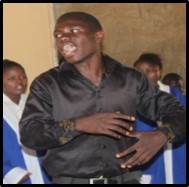 Members of the Lumwana community who attended the Hand Over of a Science Laboratory built by Lumwana Mine at Meheba Secondary School in October 2015 had a rare treat of enjoying choral music by the School Choir group. The Choir held the audience spell bound and put them in celebratory mood making them feel the music in the air. At the helm of this captivating performance, was Chrispin Mpongolwanyi whose clarity voice and astounding performance as Choir Conductor effortlessly mesmerised the audience by bringing out the best out of his team, allowing their latent talent to come alive and, most importantly, creating a synergy that ensured that the flow of music was tight, strong, and yet still borne on the wings of a poised choral ensemble. He left the audience lost for words by the clarity of the sound of his voice and the technical precision he showed as he guided his group through the different stanzas. The Guest of Honour at the event who happened to be District Commissioner for Solwezi District, Mr. Chipawa Chipawa, remarked that it was entertaining and humbling to listen to and watch an entertaining young group of choral music perform and noted the great talent that Chrispin had exibited.

Chrispin found himself at Meheba Secondary School through the Lumwana CanEducate Scholarship which was offered to him after passing his great 9 national Examinations with boarding school marks. He recalls that after his father passed on whilst he was in grade 8, his future looked uncertain. This situation was exacerbated when his mother became chronically ill and was picked up by some relatives to be looked after in the village. This left Chrispin to fed for himself.

‘Very few pupils in highschool know first-hand what it is like to pay rent, look for their own food whilst at the same time attend full time classes and prepare for an examination’, remarked Chrispin with a pensive expression on his face.

‘When I was told by my head teacher at Manyama Primary School that Lumwana Mine had offered me a scholarship to study at Senior Secondary School, tears of joy ran down my face without me realising it’, he continued.

‘I really want to thank the ‘CanEducate’ Program for the help they have rendered me without which my future would have been doomed’, he said with a brighter face this time.

He said he was working hard to pass senior secondary school examinations with good grades in order for him to earn a place at College or University. He further explained that by being accorded a chance to study at boarding school, he was able to focus on his studies, and polish up his singing and choral conductor skills. He says even if his ambition is to pursue a career as an electrician, he would like to continue with music as a part time venture and a hobby.

Even if Chrispin is still waiting for his grade twelve results, it is clear that he has places to go with his music talent.